We encourage students to follow their interests and form communities around them. Clubs have developed around environmental issues, social justice, gardening, and more. These groups provide a forum for students to explore their passions, develop leadership skills, and make a difference in their school community and beyond. Described below are well-established clubs, and new ones spring up regularly.

Chess is a fun and serious business here--all are invited, from the beginner who wants to learn the game to the skilled player who wants a casual game. The club is held regularly throughout the school year, meeting during lunch Monday through Thursday. On Monday, there is a special meeting time for the kindergarteners and 1st graders.

Our team, the Knights, is for those who want competitive play and deeper participation in the chess program. Students must try out in order to join the team, and they make a yearlong commitment. The Knights compete in local, state, and national championship tournaments and have won many awards and trophies over the years (45 state team championships at last count), including the National Junior High Championship in 1990).

On the just-for-fun side, the annual all-school chess tournament is a beloved tradition. Open to all students, players are not required to be in the club or on the team--they just need to know the basics of the game, and it's a week of friendly competition during lunchtime. The gym is packed during that week!

In addition, we are proud to note that the Nor-Cal Girls Chess Championship was started by our own Ray Orwig, longtime director of the chess program. This annual event has grown to nearly 80 players in five divisions, from kindergarten up, and the scores count toward official standings.

Students interested in environmental issues find their home here. They discuss and do on-campus research on many issues (such as energy use and carpool participation), undertake informational campaigns, encourage energy and water conservation, promote recycling and waste reduction, and are involved in projects to reduce our carbon footprint.

Just Imagine Club ensures that science fiction, fantasy, and "horror" films and TV shows from the silent era though the early 1960s will be loved by generations to come. Students are invited to watch the Friday lunchtime showings starting from the 2nd grade. They just bring their lunch to the gym and enjoy the show! Vintage Twilight Zone episodes and movies like Forbidden Planet give students a fun way to appreciate the art of filmmaking. 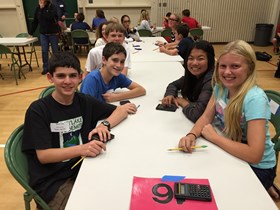 Coached by the Upper Division math teachers, the Athletes compete at Marin County meets every year, where 7th and 8th grade students face off to solve problems of algebra, probability, number theory and geometry. Individual and team awards are given, and our teams consistently place very well--impressive given that our team does not require try-outs; all who are enthusiastic about math are invited to join.